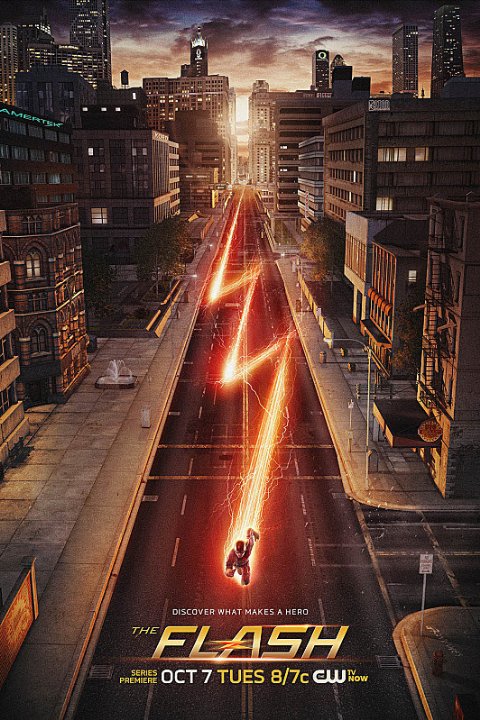 I really wanted to like this show. Flash, the fastest man alive, I remember him as a cool superhero and I could barely wait until his new show was released. However, I am sad to say that the show so far has not lived up to my exceptions.

Superheroes and superpowers, that is always fun. The special effects are really good to be a TV-Show.

Barry Allen is struck by a freak lightning originating from a particle accelerator malfunction at S.T.A.R. Labs. After a nine-month coma, Barry discovers that he has the ability to move at superhuman speeds and heal incredibly fast. Barry discovers that he is not the only one changed by the particle accelerator accident. He vows to use his gifts to protect Central City from the escalating violence of metahuman criminals. He teams up with a few scientists from S.T.A.R. Labs and his adoptive detective father to catch these special criminals.

Barry Allen (Grant Gustin) is the Flash. He is a assistant police forensic investigator for Central City and after his accident he has also become the fastest man in the world.

Iris West (Candice Patton), the daughter of Detective West and the best friend of Barry Allen. They where raised up together.

Caitlin Snow (Danielle Panabaker) is a highly intelligent bioengineering expert. She is one if the S.T.A.R. Labs scientists helping Barry.

Cisco Ramon (Carlos Valdes) is a mechanical engineering genius. He is the youngest member of the S.T.A.R. Labs scientists that are helping Barry.

Harrison Wells (Tom Cavanagh) is the leader of S.T.A.R. Labs Particle Accelerator teem and he has become a social pariah after the accelerator exploded. He is also a member and a leading figure in the team supporting Barry with his crime fighting. Dr. Wells is keeping secrets from Barry and the others, and he has secret plans for Barry. Are they good or are they evil?

Detective Joe West (Jesse L. Martin) is a detective and foster father to Barry and is the father of Iris West.

After the particle accelerator at S.T.A.R. Labs overcharged people around in Central City has become altered by the special radiation that escaped from it. They have gained special powers. Those humans are called Metahumans.

I can accept bad physics and science from shows like this, that dos not really matter. It would be hard to make a superhero show where stuff like that was realistic. What I cant accept is boring stories. They are to similar what I have seen before, only worse. It`s also so strange that almost all of the metahumans except Barry are evil. This show kind of reminds me of Smallville only not so good. Take away the special effects and the super powers, and this show would be super bad. But since I like the special effects and the superhero theme I am still going to watch it. As long as it dos not get any worse.