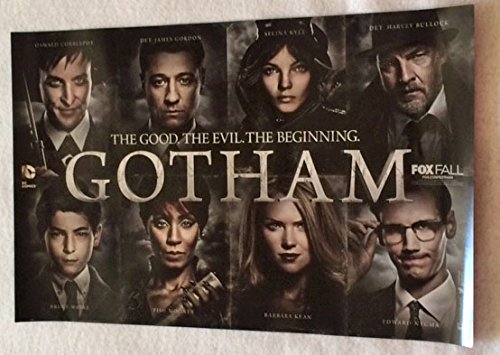 Four episodes might be to few to tell if this show is going to be any good or not in the long run, but if even if it keeps only a fraction of the quality it has shown so far it will still be a show worth watching. Its not an origin story of Batman the same way Smallville was of Superman. It might show some of the reasons why Bruce Wayne later becomes Batman, but he is not the main character in Gotham. It`s more a story about the city itself, its criminals, corruption and how Commissioner Gordon's earlier days as a homicide investigator was. I really love superhero stuff, so I might be a bit biased in my views, and I`m not into the comic books so I cant say anything about how it compares to the.

I really like the setting and mood of the show. Dark, gritty, crime fighting and full of corruption. It is also interesting that it is when Bruce Wayne is a child and long before he become Batman. The actors playing Gordon and Bullock is also a very good fit and they play good together. This show is full of interesting an strange characters that all batman fans know from before.

Hmm... Nothing at this point.

Detective James Gordon is a new recruit to Gotham City Police Department. He is partnered up with Harvey Bullock by Captain Sarah Essen. Gordons first case as a new Homocide detective is the high profile case of the murder of Thomas and Martha Wayne. Harvey Bullock takes Gordon with him to the mobster Fish Mooney for intel on the murder. This is Gordons first real first-hand experience with Gotham`s corruption and the polices blind eye to its organized criminal elements. During Gordon`s work in Gotham City Police Department he gets to know the cities main criminals like Carmine Falcone and his underling Fish Mooney, and some of the future big wigs like Oswald Cobblepot and others not jet revealed.

Gotham is a dark gothic city full of criminals and corrupted politicians. Its a mix of modern and old technology and architecture that creates a unique noire like feeling. Their desks are old fashion dark hard wood with black old phones on them, but they still uses newish celphones of the flip kind and old computers instead of typewriters. Most of the cars looks like they are from the 70s or 80s but most of their cloths looks like they are a modernized version of the 50s fashion. All this is actually melded together so seamlessly that it you don't really think any of this is strange.

Gotham is full of characters that Batman fans have heard about. Popular crime fighters and notorious criminals.

Harvey Bullock (Donal Logue) Gordon's partner, a corrupt and brutish detective that is not above giving out beating to get confessions. He is secretly allied with Carmine Falcone and his underling Fish Mooney. He is frequently using Fish Money as a source to get intel on criminals not affiliated with Falcone, a little tit for tat in favours.

Bruce Wayne (David Mazouz) is just a child in this series, he has jet to become Batman. He was with his parents, Thomas and Martha Wayne, when they where murdered. The hitman chose not to kill him. Bruce is a recuring character in this show, but he is not a main character.

Alfred Pennyworth (Sean Pertwee) is the Wayne`s butler and when Thomas and Martha Wayne is murdered he become guardian over Bruce.

Sarah Essen (Zabryna Guevara) is the Captain of the Gotham City Police Department homicide squad and the boss of James Gordon and Harvey Bullock. She is also in Falcone`s pocket, like most of the other cops.

Edward Nygma (Cory Michael Smith) is a coroner and forensics operative who works for the Gotham City Police Department and he like to presents his information in riddles. He is not a big part of the show, yet...

Oswald Cobblepot (Robin Lord Taylor) is a mobster and like a son to Fish Mooney. His strange way of walking have given him the nickname Penguin by the other thugs, which is a name he really hates. He later get in some trouble with Fish Mooney where he barley survives, but he is a crafty fucker who is tenacious in his goal of reaching to the top.

Selina Kyle (Camren Bicondova) is a young thief with cat like reflexes and the fitting nickname cat who witnessed the murder Waynes. She has a talent for both getting her self inn and out of trouble.

Fish Mooney (Jada Pinkett Smith) is a female mob leader, under Carmine Falcone. She intends on making a power grab and move up to the top. She controls Gotham's theatre district and she has a good relationship with Detective Bullock who often uses her for information in exchange for him looking the other way n her dealings.

Carmine Falcone (John Doman) is a Mafia Boss and businessman who is Fish Mooney's superior. He is the most powerful person in Gotham and has many members of both the Gotham City government and the Gotham City Police Department on his payroll.

Crispus Allen (Andrew Stewart-Jones) is a detective in the Major Crimes Unit of the Gotham City Police Department and he is Renee Montoya`s partner.

I know some people dislikes the story. Many of them argue that it is to different from the Batman storeys they know or that there are no Batman, Joker, Riddler and so on in the story. First of, there already exist a concept of Multiverse where different versions of the characters and storeys exist in different universe. It really is no big deal if this story changes from the old ones as long as most of the core concepts still are there. This show is not suposed to be purely about Batman, it`s a story about Gotham and its criminal elements and it centres around Gordon. Still, there are signs of Batman, Catwoman and some of the crazy criminals, but it is still early in their life. Maybe we get to see some of them in full action later, who knows. It might happen because of the multiverse concept. I love Gotham, it is so far really good. I might not have found any thing I really disliked about the show, but it has not enough positive things that I like to give it full pot, yet. I really hope they are able to keep this show going just as strong as it has so far and that it will last for many seasons to come.