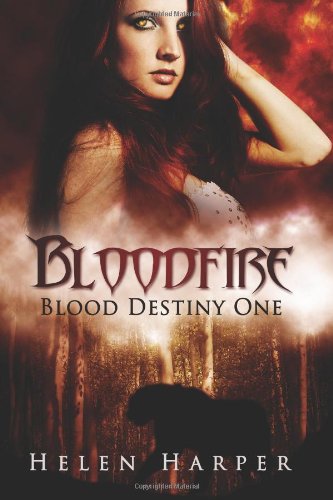 Mack might be, to all intents and purposes, a normal looking human, but she lives with a pack of shapeshifters in Cornwall in rural England after being dumped there by her mother when she was just a young child. She desperately wants to be accepted by her surrogate family, not least because a lot of them hate her for merely being human, but for some reason her blood just won't allow the transformation to occur. With a terrible temper to match her fiery red hair, Mack is extraordinarily useful in a fight, and when her pack alpha is brutally and abruptly murdered, she swears vengeance. Unfortunately, his murder also draws in the Brethren - the leaders of the shapeshifter world - who will slaughter everyone in Mack's small rural pack if they discover her true identity. Unfortunately Corrigan, the green-eyed muscle-bound Lord Alpha of the Brethren, doesn't let much slip by him.

From my library at Audible they suggested that I try Bloodfire by Helen Harper. I resisted for a while because I was in mood for epic fantasy, but when my mood changed I went for it. This is the first book in the Blood Destiny book series by Helen Harper. At this point there are five books in this series, and I have just started book three.

This urban fantasy has most of what I like. A kick ass heroin, and a plethora of supernatural beings. I also like that it is set in anther part of the world than the US. The romantic parts of the book is not to dominant, it might be to little for some, but I like it this way.

I had some problems with the main character in the beginning. It has become better during the next books, but it was a little irritating. Her temper is a little over the top, but this will become explained later, and she is to eager to put her self in risky situations from idiotic decisions. This book is not exactly original, which is a point on the negative side, but that do not really bother me to much.

Bloodfire is written in first person from Mackenzie Smith`s point of view. It belongs to the urban fantasy genre and it`s structured similar to most of the other books in this genre.

The story takes place in present day England in a rural corner of Cornwall. It is actually a pleasant change that it takes place in England instead of the all to common US. I wish more urban fantasy books dared to write from different parts of the world. Later in this series we also get to see other places in the British Isles, like parts of Scotland and London. It is set in an alternate world where supernatural beings and magic exist hidden from you common humans... The Cornwall pack live on the outskirts of a small village in a old medieval square castle. They have plenty of forest around that the villagers seldom travel in. They hear plenty of animal noises from it and they know that the strange but friendly cult, as the believe the pack is, use the forest.

John, then Cornish pack alpha is murdered. This is not only devastating for the Pack but also for Mac. John was like a father for Mac. She wants nothing more than to find the murderer and rip him apart limb for limb. This will however not be as easy as she believed. She cant find any trace of the murderer, and to make things worse, the Brethren are coming to investigate the murder and to oversee the change to a new alpha. The problem with them coming is that Mac is not a shifter, she is a human. And humans are not allowed to discover the packs existence. They believe that the Brethren will kill them all if they discover Mac`s true identity. Mac thus have to disguise herself with the sent of a werehamster and act like a week werehamster. Mac`s personality will make this last part extremely difficult, if not impossible.

The main character is Mackenzie Smith, but there is a group of other characters that are and will be a central part of the story to.

Mackenzie Smith, or Mack as she likes to be called have grown up with the Cornish shape-shifter pack. John, the pack alpha, is like a father for her. They all believe that she is human, and that the Brethren will kill them all if they knew they where harbouring a human among them selfs. She wanted to become a shape-shifter, but the transformation did not work when she was bitten. Mac`s blood is not exactly like a regular humans blood. It boils with rage when one of here well known terrible rages hits her, and it sharpens her focus at the source of her rage and she get stronger and faster than she usually is. More about this blood will be reviled as the series unfold, what causes it, its properties and so on. Her pore impulse control makes her lash out both with words and with fists. I had some problems liking her at the beginning, but as I got longer out in the book I started to gradually like her more. She is a little to much single minded, stubborn, and untrusting to some. She gets a little better as the series unfold, but it is still irritating at times.

Corrigan is the new Lord Alpha of the Brethren and a black werepanther. When the Brethren comes to the Cornish pack he takes a little to much interest in Mac. She is doing her best to hide her nature, but it is not exactly easy giving the pore impulse control and rage that is at the core of here nature. I want to dislike Corrigan because he might destoy an entire pack only for harboring a human. But it is kind of hard hating him when it looks like ha actually care for his underlings wellbeing. Some of the Brethren that we get to know is actually quite nice too.

Alex is a mage with a laid back surfer persona. Hi is sent out by the Ministry of Mages on a contract with the Brethren. He is hired to divine what happened when John was killed by magical means. Alex and Mac becomes friends and Alex helps her out on her path for revenge against Johns killer. He is however only helping out on the primes that he is not required to fight any bad guys.

John is a weretiger and the late alpha of the Cornish pack. He was killed by a supernatural being for defending his pack. John has also been a father figure for Mac and she like a daughter for him. When Mac wanted to become a shape-shifter on her eighteen birthday he was the one that tried to turn her.

Anton is a werebear, and a member of the Cornish pack. He can be a bully and hate Mac. He do have some good sides, but not around Mac. The main reason why he hate her is because he believe she is human and her being with them sets the pack in danger.

The main character types in this first book is shape-shifters and magicians. There are also wyverns, daemonic beings, ogres, demigods, and what ever the frak Mackenzie is. As the series keep going even more supernatural beings are introduced.

The Brethren is the controlling organization that keeps order among all shape-shifters. The Lord Alpha is the alpha of not only the Brethren but also over all other packs and their alphas. They keep control so no single shifter goes out of his place and risks outing them to the humans.

The Cornish Pack is the pack Mac is raised up in and lives with. They are a small pack in rural Cornwall that have had little to no contact with the rest of the supernatural world for many years. They are also placed under a gesh to not talk to anyone about Mac`s human condition.

In Bloodfire we barely get introduced to the existence of mages and their ministry from mage Alex. All we know for now is that they rent out mages to solve magical problems for other denizens of the supernatural world. The Ministry of Mages will play a bigger role in the later books however.

Bloodfire by Helen Harper is not the best urban fantasy book, but it is still a good book worth reading. I plan to keep reading this series, and are already going to start on book three. This first book toke me a little time to finish, but the second one I finished in one go. I hope the third one will be just as good. If you like urban fantasy and are not to bothered by books following a well written path, then this is a book you definitely should give a try. 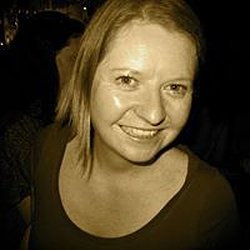 Helen Harper is an English teacher currently living abroad in Malaysia. As a long time reader of urban fantasy, she finally bit the bullet and began to develop her own series of novels.Helen has always been a book lover, devouring science fiction and fantasy tales when she was a child growing up in Scotland. "I always loved the escapism provided by those genres," states Helen. "No matter how bad life gets, you can always find a route out, even if only temporarily, in the pages of a good book." The growth of urban fantasy fascinated her - the mix of reality and fantasy along with strong heroic female characters appealed from the very beginning, and inspired her to write her own.
Twitter    Facebook    Goodreads    Website    Amazon