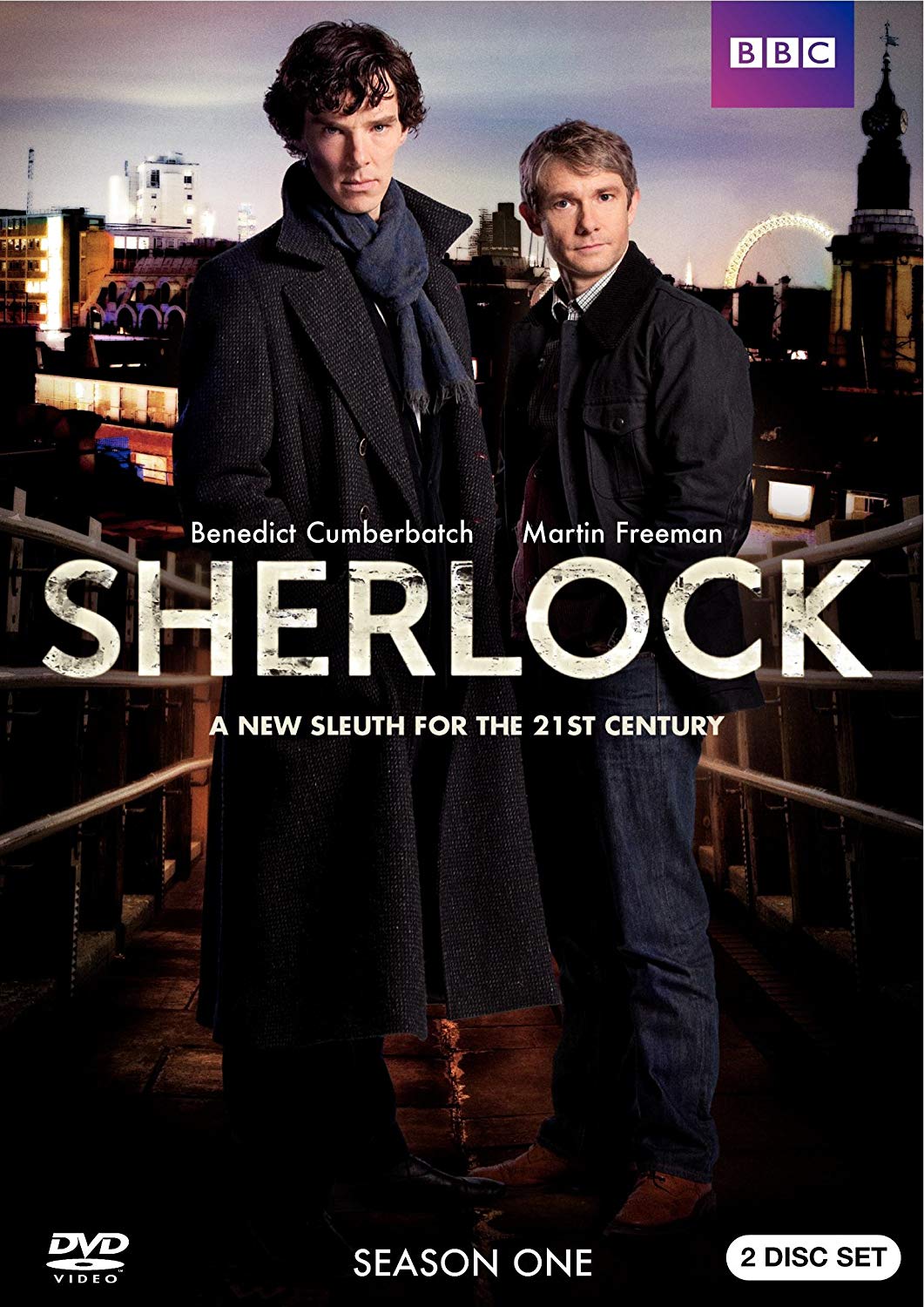 I remember I read my first Sherlock Holmes book when I was around ten, and from that day on I have been a Sherlock fan. When I herd BBC was creating a modernised version of Sherlock Holmes set in Contemporary times, I was stoked. A modern day Sherlock would be so cool. I was curious to see if they could compete with all the other crime shows with main characters that is a kind of altered version of Sherlock. Luckily for me, and probably for you, they managed to do that.

I really love how they visualize Sherlock`s reasoning powers. Its so fast and fancy. The way they have integrated Sherlock with modern day technology to solve cases is also very good.

My main dislike is the short seasons. Only three episodes. That is way to short. Longer seasons would also make it easier to get more of there personal life into the story. The way it is now too much time pass between the episodes and their personal life is evolving without us watching it.

Sherlock is a new contemporary take on the classic Arthur Conan Doyle stories. Many of the details and stories from the original books are kept, only modernised to fit in today's society and technology. Dr. John Watson returns to London after he got wounded in Afghanistan. He is now a veteran army medic that has regular psychiatric checkups. Dr. Watson needs a flat, and through a mutual acquaintance he ends up becoming a flatmate with the brilliant and eccentric private investigator Sherlock Holmes at Mrs. Hudson's apartment at 221B Baker Street. Dr. Watson ends up joining Sherlock when he is asked by Inspector Lestrade to help solve the suspicious death of Jennifer Wilson. She is the forth victim in a string of apparent suicides. The reason why her death was suspicious ant the other thought to be ordinary suicides is that she Rachel on the floor as she was dyeing. This leads Sherlock to confront a terminally ill serial killer who slays people in an unusual way. He does this in part to show superiority over the rest of society, and he is now determined to make Sherlock his next victim. In "The Blind Banker" Sherlock has to find puzzle on two cases with people killed inside locked rooms. This gets him in the headlight of the Chinese Black Lotus crime syndicate. In "The Grate Game" Sherlock is sent on a crime solving spree by a criminal mastermind that threatens to blow up hostages if Sherlock fails at any of his puzzles. One of the episodes also is an modernisation of the classical "The Hounds of Baskerville". Sherlock usually takes on unusual and hard cases that intrigues him. A typical case if full of incredible deductions and a dose of danger. All the press reports on Sherlock and his eccentric personal life has made Sherlock is a reluctant celebrity. -Both ordinary people and governments ask for his help.The TV series depicts a variety of crimes and perpetrators but Sherlock`s conflict with his arch-nemesis Jim Moriarty is a recurring threat through the show.

Sherlock takes place in modern day England, and mainly in London. Recurring locations are 221B Baker Street and Scotland Yard. Some of the cases have them travelling around the country, but most of them are in London.

Sherlock (Benedict Cumberbatch) is a consultant detective, the only one in the world. He often helps out Scotland Yard when they have problems with cases, but he also takes on cases from private citizens and other government agencies. He is a tall skinny man with curly dark heir. Like the original Homes he is able to deduce likely facts from small seemingly insignificant details. He has an unusual personality. He calls himself a highly functioning sociopath, while others have described him as being a psychopath or having Asperger Syndrome (NOTE: Asperger Syndrome could be mistaken for the other two, but they are entirely different things). Whatever he has, he has something, and it makes him having poor people skills, acting rudely and careless to others, and he is bad at judging risks. Luckily for him, with all the risky situations he gets mixed up in, he is also an excellent practitioner of hand to hand combat. For Sherlock`s brilliant brain to be able to do its marvellous deductions he has to have information to work with. In addition to be able to see the smallest details on a crime scene he also uses modern and not so modern forms of information gathering. His trusted smartphone is a tool that he constantly uses too look up facts and his underground homeless network. He also uses a power charged real world memory technique called the mind palace to remember all the facts that is necessary for his work.

Dr. Watson (Martin Freeman) is an ex military medic. He got wounded in Afghanistan and was sent back home, and is now bound to a cane. He also has to go to a psychiatrist for help with dealing with his problems. Dr. Watson is the opposite o Sherlock in so many ways. He is short, blond, kind and compassionate. The main similarity between the two, and a significant it is, is that he also is hooked on risky thrilling adventures. Dr. Watson joins Sherlock as a sidekick in his P.I. business/hobby. He writes a blog about the cases they solve together, which helps them with publicity and thus receiving more customers.

Detective Inspector Greg Lestrade (Rupert Graves) works for Scotland Yard and he is the one that has to deal with Sherlock. He has a reluctant respect for Sherlock, but he is often frustrated by Sherlock's cryptic deductions, withholding of evidence, and his tiresome personality. He is however one of the few people Sherlock thinks of as his friends.

James 'Jim' Moriarty (Andrew Scott) almost as brilliant as Sherlock, and they are similar in so many ways. Like Sherlock, Moriarty is also motivated more by boredom then power or money, but he has stepped over to the dark side. In stead of being a consultant detective like Sherlock is is a consultant criminal. Other criminals come to him for guidence to solve tricky problems. He is actually the man behind the man in many of Sherlock`s cases.

Martha Louise Hudson (Una Stubbs), is the landlady of 221B Baker Street where Sherlock and Dr. Watson lives. She repeatedly insists that she is not their housekeeper but she fusses over Sherlock as if she were. Sherlock often keeps human body parts in his kitchen for experimentation, this is of course horrifies Mrs. Hudson. Sherlock is not to nice to her, he can be quite rude as he is with others. But he clearly cares about her. When other people mistreats her he is brutal in her defence.

Mycroft Holmes (Mark Gatiss) is Sherlock`s brother and he is just as brilliant as Sherlock himself. He on the other hand has chosen a carer more fitting for his intellect than what Sherlock has. He is high up in the British government. He thinks Sherlock is wasting his potential by "playing" at Detective, but he admits that it is better that what he wanted to be when he was younger, a pirate.

Sherlock Holmes: When I met you for the first time yesterday, I said "Afghanistan or Iraq?" You looked surprised. John Watson: Yes, I did, you know. Sherlock Holmes: I didn't know, I saw. Your haircut, the way you hold yourself, says military. The conversation as you entered the room - said trained at Bart's, so army doctor. Obvious. Your face is tanned, but no tan above the wrists - you've been abroad but not sunbathing. The limp's really bad when you walk, but you don't ask for a chair when you stand, like you've forgotten about it, so it's at least partly psychosomatic. That suggests the original circumstances of the injury were probably traumatic - wounded in action, then. Wounded in action, suntan - Afghanistan or Iraq. ...

Sherlock is a must watch show for any Sherlock Holmes fan, and most others would also love this show. This TV-Show has grate actors, god mysteries, and fantastic deductions. My only wish for this show is that they start to make longer seasons.