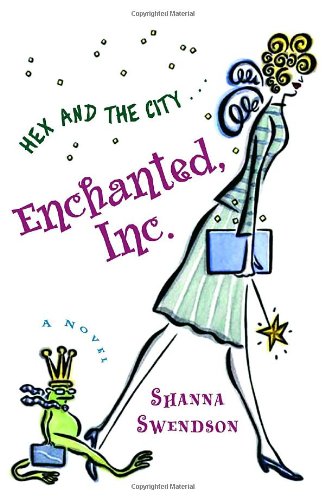 ENCHANTED, INC is a magical story featuring Katie Chandler, a 20something, small-town Texas girl, who finds that being average in New York City is anything but. Katie is still adjusting to life in the big city while working a for a nightmare boss when she gets a fantastic offer to work for a mysterious company, MSI, Inc. Through her new job and the magical folk she meets, Katie comes to find out she isn't quite as average as she thought; and the fairy tale life she has longed for begins to come true in surprising ways. What Katie doesn't realize is how rare and important being ordinary can be. In fact, it is her ordinary characteristics that make her the perfect secret weapon for MSI, Inc. Now she has magicians and fairies meddling in her attempted romances, a secret life she needs to keep hidden from her non-magical friends, not to mention that dangerous pull she feels for Owen, an attractive but shy wizard who might be the most powerful magic man since Merlin.

I like the use of humor in this book, it flows naturally into the story and it`s not forced like it is in some books. It`s also interesting to follow a woman who is not the standard bad ass violent ass kicker, not to used to that. I guess thats because this book is not Urban Fantasy but more of a Paranormal Chick lit book. I also cant remember Katie do any thing obviously idiotic, like the protagonist often do in some books.

Its a little to much romance for my liking, but I knew that when I started on the book. The protagonist might be clever, but some other parts of the story is kind of idiotic. There was times that I wondered how it is possible to that stupid, or not to know that, and so on. I wont say exactly what it is because of spoilers, but some of it have to do with how bad the magicians are to adapt to the modern world even if they live in the center of New York.

In this series there are supernatural beings hiding among you regular people. Most of you regular guys have some magic in you, but only enough that us magical folks can use magic on you. There are however a few people around that have no magic at all, like Katie, that are immune to our magic. Among us magical beings are magicians, like my self, that are humans with enough magical potential to make use of it. And there are other beings like Faeries, gargoyles, gnomes, and so on.

Katie is a 20 something woman from Texas whose life has been all to ordinary. When she moves to New York and starts to see strange things, people with wings, gargoyles that moves, small garden gnomes that also moves, she explain it away with believing it is how it should be in a crazy place like New York. She later discovers that she is one of the rare people who has absolutely no magic in them and so magic can not be used on her, which means that the magical beings cant glamor her to believe they are ordinary humans. It is this immunity that makes MSI want to hire her as a verifier. She can see through every spell or veiling without exception. This is invaluable for a business dealing in creation and sales of spells. It is also is invaluable for business dealings, especially when glamors and other magical tricks are a daily part of having business.

Owen is shy, intelligent and extremely powerful. He works for MSI under the R&D department. He usually looks for ideas for new spells by translating rare ancient spell books. He and Katie get some good chemistry flowing between them. This is sadly for them but thrilling for us complicated by the arrival of Phelan Idris, who has a vendetta against own, and his scheming plots.

Rod and Own has bean best friends since childhood. Rod is in contrast to Owen social outgoing and a playboy. He makes people fall for him by hiding his sloppy appearance behind a perfect illusion. He and Owen are the ones who recruit Katie

He is actually the real merlin from King Arthur and he is the founder of MSI. He placed himself in an enchanted sleep only too be woken in time of dire need. He has now bean woken up and given back the leadership of MSI. Katie helps him out with teaching him about the modern world, and hi is found of Katie and her honest hard work.

Idris is a former employee of MSI and coworker of Owen. He got fired for working on unethical magic spells on the company`s dime. Wat is he doing now, and how can MSI do about it.

A lawyer who specializes in intellectual property. Katie and Ethan met on a date (He was set up with one of her roommates) and started talking about law. After consulting with Merlin, Katie asks Ethan out, mostly to find out if they had an intellectual property case against Idris. On their date Katie finds out that Ethan is an immune and recruits him to be a lawyer for MSI.

The head of security for MSI and also a gargoyle. Katie had been seeing him around the city for months prior to finding out that magic exists

Katie's roommates. Normal humans in every way (except maybe a little brighter and more beautiful). Katie is not allowed to tell them about magic and that is fine with her, she needs some normalcy in her life. It does cause problems, though, when Katie needs to sneak away to battle evil magicians, or when her friends start dating former frogs she freed from enchantment.

Enchanted, Inc, and the following books, are absolutely worth reading, but it`s not among my favorite books. If you are a fan of chick lit and paranormal books then this book will probably be a must read for you. 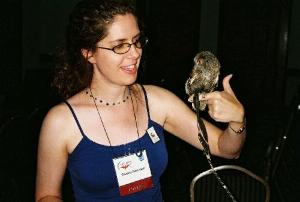 A little girl learned to amuse herself by making up stories in her head. She turned everyday activities into exciting adventures, and she made up new adventures for characters from her favorite movies, TV shows and books. Then one day she realized that if she wrote down those stories, she'd have a book! But that was crazy, she thought. Real people don't become novelists. That was like deciding you were going to be a movie star. You couldn't just go and do it. But, it turns out, you can, and she did. She realized her dream of becoming a novelist and seeing her stories in bookstores. And then she started to wig herself out by writing about herself in the third-person. This is her story... homepage
Website Goodreads Facebook Amazon